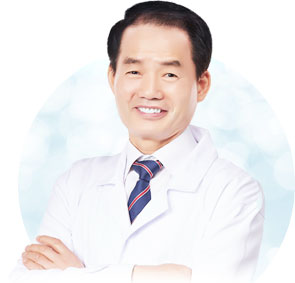 We have researched on hydro-science for human health since 1980

While experiencing the tearful spring austerity of poverty and hunger after being born in Jiri Mountain in 1952, the boy grew up with the dream of “becoming a person who will solve the sorrow from hunger.”

He joined the Saemaeul movement under the motto, “Let’s try to be rich,” and became a member of society when the nation became industrialized. Looking at ‘people suffering from geriatric diseases which hadn’t existed before, instead of the sorrow from hunger’, he began to be absorbed in research dealing with questions about the causes of human illnesses.

After he realized the great benefits provided by water and that the laws of water hold the secret to the sources of life and are related to the basic principles of health and longevity, he came to have the belief that “ gaining knowledge about water was the most righteous and valuable thing which men could do”. Accordingly, he started to study hydro-science in 1980 to realize his mission and philosophy. He states his usual philosophy about health by saying that “he had to prove his belief through cultivating his moral sense with craftsmanship” and confidently says, “I am the very proof of the result.”

He won 13 gold medals at international invention fairs held in various nations, such as Germany and Switzerland, as a scientist of Korea after overcoming all kinds of hardships and ordeals and in so doing enhanced the prestige of the nation. He received ‘the Order of Industrial Service Merit Iron Tower ‘from the President on the 46thanniversary of Invention Day and won a huge number of prizes inside and outside of the nation. In particular, he won a gold medal at the World Genius Championships in Japan and a special prize at the International Invention Fair.

He has secured about 100 invention and other related patents. He obtained proved to be effective at a rate of 85.7% after he got approval from Institutional Review Board (IRB) with the support of the city government for the first time in the nation and Seoul National University Hospital conducted a clinical trial of water produced by KYK hydrogen water generators. After the Ministry of Food and Drug Safety in Korea verified the safety and efficiency of water studied and produced by Kim, he acquired a license (2008) for water effective in improving four major gastrointestinal disorders which couldn’t be cured easily by medicines and thus raised public confidence domestically and internationally in his techniques and inventions.

He attended economic summits between Korea and China, Korea and Russia, Korea and Singapore, and Korea and India and achieved favorable results through signing MOUs valued at over US million. Since then, he has been exporting products step by step.

He owns a publicly-certified R&D center, a license for manufacturing medical devices and a factory that has acquired the GMP certificate. His products have been selected by the nation as high-quality goods (a CEO creating high-quality goods and forum executive). He has appeared in a large number of programs broadcast by KBS, MBC and SBS TV and was selected as one of 33 modern figures in Korea, and has exported products to about 50 nations. Hundreds of thousands of consumers in Korea and abroad have actually used his products.

The reputation of his technology increases day by day and the history behind his success grows longer. His technology has accumulated. As his technology has become more popular and better recognized internationally than domestically, so many people have requested opportunities to invest in the technology. He has invested in technology for promoting human health.

He still makes endless efforts with consistent craftsmanship and keen enthusiasm in order to provide the highest value in terms of health, beauty, happiness and quality of life to fulfill the desires of people, to generate jobs and to make a contribution for the development of a wealthy and powerful nation.